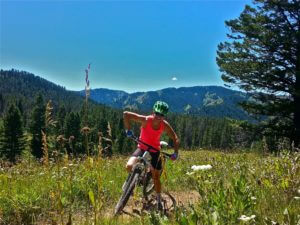 Continuing on with our “Meet Our Coaches” series brings us to one of our Shred Sisters who’s background in biking goes to show that channelling your motivation can really get you places. Segment number two invites you to learn more about our coach Brianna Roth.

Growing up Brianna was involved in plenty of sports and pursued soccer and track and field into university. Those were her passions. Moving from playing soccer at a competitive level to recreationally was something she had anticipated to be an easy step while moving into a career—however that only lasted about a year. She was living and working in China when the mountains began to call her name. She packed up and moved back to Canada, deciding on Canmore as her new home. This move came with the desire to try a new sport—mountain biking. Mountain biking had been on her radar for a few years but she had never really tried it outside of camping trips. “Within a year,” she proclaims, “I was really, really stoked and completely fell in love with the sport.” 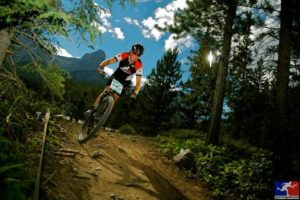 When she first moved to Canmore, she hired a coach in the fall. This meant she didn’t sign up for any races, but rather dove head-first into training mode. She trained indoors throughout the winter season, allowing her to join and compete the following season in a handful of cross-country races. Her first race was her favourite. Toting it as memorable to say the least, Brianna admits she had no idea what she was doing. “I knew I had worked hard but I had no idea what Mountain Bike racing looked like. I basically hit the ground running right at the start line and just pedaled as fast as I could. I tried to get out in front and felt pretty frantic the whole race but it was a really cool experience,” she explained to me. For her first race, Brianna definitely came out on top. She ended up winning, but she was quick to add that “I had no clue I would be able to do that considering I had just jumped right into it without any experience or strategy”. It’s not the win that she counts as the most memorable part, but rather that it got her excited about the “whole racing thing” and beyond this, it gave her the confidence to continue to compete.

She started out with Cross-country racing for the first three seasons and worked her way up until she reached UCI Elite Level Status, so racing at the top level in Canada. She then decided that the training required to do cross-country was not as much fun as going out riding with your friends and pushing herself on technical terrain—so she transitioned her focus over to Enduro racing. She does note that she still keeps up with the cross-country racing,
“mostly for the fitness benefits,” she said with a laugh.

Her first experience teaching biking skills was when she was living in New Zealand. She was working at a ski resort that opened up as a bike park in the summer that allowed her to have a few opportunities, more along the lines of guiding. Her break into adapting her coaching skills here in Canada has been with leading group rides and beginner courses with Shred Sisters, where she gets to help teach the tricks and tips she has learned throughout her racing career.

Her favourite skill to teach is descents and positioning. Both of these tie in with navigating obstacles, so they’re important to becoming a well-rounded biker. Her philosophy to teaching circles around the idea that “one of the best things in life is to be a part of someone’s success story”. She notes that the best way to help her riders improve is through individualized feedback and encouragement. She enjoys getting to witness and help along both the small and large victories of her riders gaining confidence on a bike. As she put it “to see an individual reach that moment and experience ‘the stoke’ of mountain biking is why I coach.”

Back when Brianna first started biking, she wishes someone could have told her to work smarter not harder. This derives from the principle of riding smoother rather than muscling through something—which she notes she tends to do. In saying this, the most valuable piece of advice she’s been given has been an amalgamation of advice from her first coach and other athletes. “The most valuable [advice would be] to enjoy yourself and put in the hard work but trust that what you’re doing will pay off. Keep it fun,” Brianna says with a smile. 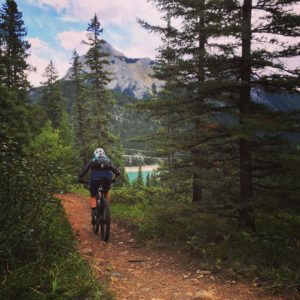