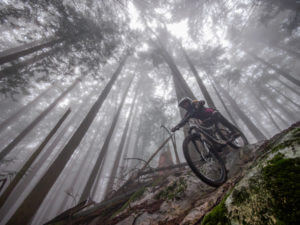 We now find it time to introduce another one of Shred Sister’s incredible coaches. This time we invite you to meet Sierra Sullivan. Her first experience biking was a common one—a boyfriend at the time had encouraged her to try it out. From there it snowballed, first starting off with cross-country biking, which got Sierra into simple double track, then a hardtail took her onto single track. Then suddenly she found herself with a full suspension at the top of Kicking Horse Bike Park with her season pass. As much as her experience had started off as a whirlwind introduction, along the way she touts one thing to her success: amazing coaches and mentors. Sierra is so grateful to have had the opportunity to learn to bike from those who wanted her to succeed, and says without hesitation that her experience with biking coaches and mentors particularly Audrey with Shred Sisters “has completely changed my life for the better”.

Sierra started coaching mountain biking for the Whistler Off-Road Cycling Association (WORCA) in 2016. Mostly focusing on kids camps for five days a week over the course of several months, she expanded her coaching to kids and women’s weekend camps all around coastal BC. She had previously worked as a ski coach and throughout her life she spent many years coaching and teaching dance. 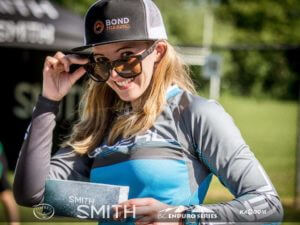 Before Sierra became a part of our coaching team, she was an ambassador for Shred Sisters! Check out her other posts in our blog including “Feeling Ambitious? Try this excellent Golden Ride” and “Five Reasons to Learn to Wheelie with Ladies”. Joining Shred Sisters as a coach has given Sierra the opportunity to continue to teach and coach in a sport, environment and format that she loves. After having spent a season coaching in Squamish/Whistler, she realized how much she enjoys instilling her love of riding in others. After moving back to the Rockies, she was hoping to continue coaching and Shred Sisters allowed for that opportunity. “With all that Shred Sisters has allowed me to discover in my own life, I would love to give back to other women.”

It’s easy to see how coaching comes very naturally to someone with such well-rounded and varied skills as Sierra. Her background in dance, skiing, and biking is a direct influence on her teaching philosophy. “I love to teach people to move,” Sierra starts, “Fluid and strong movement is one of the most satisfying sensations for me and being able to pass that on is incredibly rewarding”. Throughout her extensive background, movement is centered in her coaching philosophy as it has so many benefits and rewards—“confidence, safety, and enjoyment, just to name a few”.

Interestingly enough, while her teaching philosophy is firmly centered 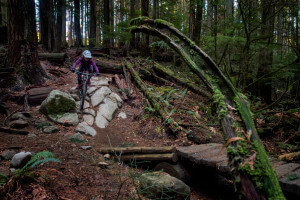 on movement her favourite skill to teach literally stops you from moving—and that skill would be braking. As it’s something that is one of the first skills to learn when we hop on a bike, braking often gets forgotten. Sierra is all about focusing on braking for the sake of strategic braking. This comes along with “developing a clear understanding of when, where, and how to effectively slow or stop a bike. Often overlooked it can make an outstanding difference to a rider’s confidence and riding ability” according to Sierra. When people change their ideas, lose their fear, and abandon their misconceptions of braking they end up more confident on their bikes. Sierra was quick to add “as an extension to that, I love to teach riders how to descend slabs! It’s all in the braking, and success on slabs is an incredible feeling!”
See? Core skills are important and we often forget but they are foundational to building other skills as you gain experience.

Back when Sierra started biking, she wishes someone had told her to learn how her bike works and the mechanical skills to fix it. Mechanical work is both necessary and empowering. As Sierra puts it “it not only feels good being able to quickly run over your bike to ensure it’s in great condition to ride, but it is also an important safety consideration. Any riding day or trip can come crashing down based on a mechanical hiccup, it’s important to be able to at least diagnose and at best, fix the problem”. 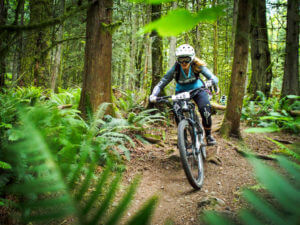 The most valuable piece of advice Sierra was given was by a photographer, who also happened to be a rider and a great coach. He had told her to make shapes when she rides. To further explain this, making shapes would be creating lines and angles with your body and bike. “Creating these shapes helps accentuate movements, driving, and manoeuvring the bike underneath you to make your descent down a trail more powerfully and efficiently,” Sierra notes, “most often, I relate this to cornering—really accentuating leg lines and arm lines to power through a corner”.
(Pretty clear to see how Sierra’s teaching philosophy of movement applies to so many foundational concepts and skills in biking, hey?)

Sierra’s best piece of advice to give you fellow Shred Sisters?
“Smiling makes it hurt less. If you grin through a crash or a fall, you barely feel it at all!”

Audrey here! I had the pleasure of teaching Sierra with one of our intermediate programs, that little machine, I had to tell her to slow down that it wasn’t’ a race and we weren’t chasing the boys! I was so stoked to see her grow throughout the program—her body awareness was so strong that she could take in any feedback.

It wasn’t a surprise to me when she told me the following summer she registered for an all the Bc West enduro race and the canadian national. She had that competitive nature and she definitely had the passion for it! In my head I was extremely impressed by how brave she was, after only riding for about 2 years she was going for endure. This was something I wouldn’t have done or would have put myself out there like that, to me it would be like putting me totally naked in a front of a stadium! Sierra’s story actually reminds me a bit of Eddie the Eagle.

What you can always find with Sierra is a hugeee smile, giggles, and a very driven person who wants to help other gals! 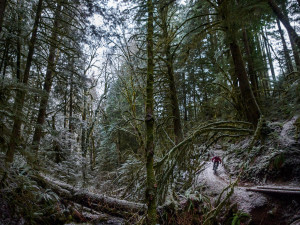 « Meet Our Coaches… Brianna Roth
Buying a Bike: Where do I Even Start?! »