Shred Sisters is focused on bringing you the most passionate coaches that are dedicated to your development. Our coaches are constantly improving themselves as cyclists and as instructors. To enhance your overall bike experience, we strive to have the best local coaches in each town we offer our programs!

Caution, Audrey’s enthusiasm for biking is contagious! Her love for biking began 13 years ago and she has been mountain biking for 9 years now. From teaching spinning classes to mountain bike instruction, her passion will ignite your riding!

Audrey started with the Dirt Series, co-hosted a mountain bike and yoga retreat in Golden, BC and offered weekly mountain bike courses for women during her first years as a professional instructor. As a result of her experiences, Audrey decided to focus her energy to support other women in this male-oriented sport.

Now, with Shred Sisters, Audrey is teaching mountain biking full-time in the summer and in the winter month’s she is working in the office.

What can you expect from learning with Audrey?

Audrey loves to share her passion. She find gratitude in seeing her clients’ smiles when they accomplished something they never thought possible!

“If it wasn’t for those rad women I wouldn’t have carried on with riding!”

Lynsey remembers the struggles of entering the world or mountain biking. In 2008, she joined an adventure racing team and bought her first real mountain bike. She still remembers her first experience on single track during a weekend training session, with a brand new bike, and wearing a pack filled with camping gear. She was terrified and ended up wiping out on almost every corner, bump and hill! She was so frustrated for not being able to keep up with the group and by how difficult biking was. After that, she was surprised she even got back on her bike!

It was through the support of her friend, who took her under her wing, that she was able to navigate the steep learning curve of getting into mountain biking. She was introduced to fellow female riders and was able to finally fall in love with the sport. Now come summer, you won’t find Lynsey without a bike! Through Shred Sister’s, Lynsey wants to pass on the same support to other women that allowed her to find her love of wheels on dirt!

Her philosophy of teaching is rooted in the idea that “one of the best things in life is to be a part of someone’s success story”.

Growing up, Brianna’s passion lay in sports such as soccer and track and field, where she ended up competing at a University level. She never predicted her drastic change in recreation of choice! She was living and working in China when the mountains began to call her name. She packed up and moved back to Canada, deciding on Canmore as her new home. This move came with the desire to try a new sport—mountain biking! 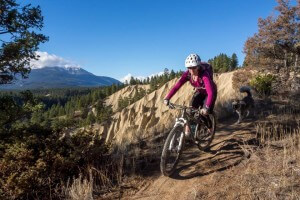 Getting into biking doesn’t have to be pretty!

Sierra discovered mountain biking after buying a hardtail bike, in the middle of a wedding, in Vancouver. During her second ride down Selkirk Slackers in Golden, BC, she was fairly certain that she was destined to run into every tree. She made a promise to give mountain biking three more chances, and by the end, she was hooked!

Sierra loves the challenges of learning and enjoys the feeling of success from tackling things that scare her. As a writer for Shred Sisters, she would love to share her experiences, fears, and adventures with other women in the hopes of inspiring them to “just get out and ride!”

Since starting in July 2014, she has ridden trails across BC and Alberta (and in the Caribbean!) and has thrown herself into the sport with the fever of a dog chasing a squirrel! This season, she’s excited to join the team as a coach and looks forward to helping other women improve their mountain biking skills.

As many of us know, going out with fantastic riders doesn’t  always translate to fantastic learning experiences! Friends and family can be impatient or have forgotten what it’s like to ride over roots and stumps for the first time.

Back when she started riding, she was mostly trying to keep up with the guys. Deanne grew up with the neighbourhood boys who had a different idea of biking than most of us; their style included dropping off roofs, finding the highest and longest skinny, and doing stair gaps to flat!

Eventually, Deanne picked up a cross country bike, not to join in on their teenage boy-style of biking, but rather to ride with them along some of the great trails that would lead to the scary locations and death-defying acts. After all, as Deanne puts it, “someone had to take care of them if they blew up!”.

When Deanne began to ride with girls, she found it completely refreshing! Since then, her riding and coaching style hand evolved hand in hand. She wants to help you find your limits without the pressure of “keeping up with the boys”.

“Deanne was so wonderful, approachable and relaxed. She made the whole experience fun and non threatening! I can’t wait to come back and do some more courses! Rad program!” 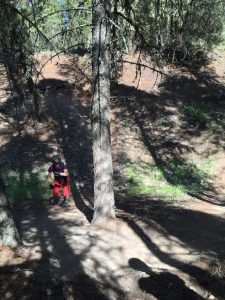 “We grow when we take calculated risks, have the courage to challenge our current conventions, and remain open to new opportunities.”

Becca has had a lifelong passions for sport, fitness, and outdoor adventure. Having grown up in the suburbs of Toronto and spending summers at camp on Beausoleil Island in Georgian Bay, she was exposed to a vast array of athletic endeavours. It was during this time that her desire to share her experiences with others was also sparked.

After graduation, Becca moved out west for one ski season … this one season turned into a new life. It is here in the East Kootenay’s, almost 20 years later, she continues to live, work, and play!

“Be brave. Take risks. Nothing can substitute experience.” – Paolo Coelho

One could say that Jessica was born to ride! She first started mountain biking at 8 years old because her rad mother was, and still is, obsessed with the sport. Now, she’s also smitten with mountain biking and is always looking for ways to improve her riding.

Jessica is a both a yoga and mountain bike instructor who loves adventure and having fun. In college, Jessica studied Adventure Tourism Business Operations where she learned a lot about guiding and leading people in the wilderness.

Jessica is stoked to share her love of Golden, her eagerness to ride, and her focus on and off the mat as part of the Shred Sisters crew!
Click here  to learn more about Jessica!