Lynsey been coaching with us since the start! As a coach, Lynsey enjoys working with riders who scared or nervous about trying new things because she has had to overcome these feelings herself. Lynsey is always pushing to improve her own skills and feels that she has a lot to share as a coach. Lynsey is an osteopath.

Her background with biking is extensive and this wealth of experience, among her other amazing attributes, makes her a definite asset to our team.

Lynsey first began mountain biking in Edmonton when she was asked to join an adventure racing team. Previous to this, she had been a National Team Kayaker for ten years. Of course, if you’ve met Lynsey it will not come as a surprise that not only was she actively kayaking, but Lynsey was also involved in climbing and ultra marathons as well. These activities are part of the reason she believes the adventure racing team believed she would be a good fit. However, upon joining the racing team Lynsey realized she had not really biked single track much and it was going to be a huge part of the races. This led her to buying her first bike—without having any real experience.

“To be honest, with all my adventure racing gear and no skill, I hated it,” Lynsey stated.

About a year later, she moved to Canmore. It was in Canmore where she met a bunch of influential women who also biked. This camaraderie and support taught her how to have fun on a bike. From this point, she started attending biking camps along with one of her new found bike friends in Canmore and has been addicted to biking ever since.

After she attended these bike camps, she noticed she would start sharing little hints and tips to her friends on the trails. This led Lynsey to start tail gunning (following up the back of a group) and assisting her friends who were also coaches in 2013. She fell in love with coaching and took her PMBI (Professional Mountain Bike Instructors) in 2014. Her first “official” coaching experience was one of our 5 week beginner programs in Banff!

“I was blessed to be there with Audrey when she was first starting the company,” Lynsey said, “It looked very different back then but the goal has always been the same: get more women having fun on their bikes. That is a philosophy I’m happy to stand behind.”

She has been a successful member of our coaching team. It’s obvious to see why as her coaching philosophy is: “If you don’t have a giant smile on your face while you’re on the bike, I am doing something wrong.”

Centered around her coaching philosophy, Lynsey’s favourite skills to teach are basic manoeuvring skills such as wheel lifts, wheelies, manuals, drops, and jumps.

“[These] are my favourite skills to teach because a lot of women think they can’t do these things and it is just so rewarding to see how excited they get when they realize they can do it,” Lynsey shared with us. See a trend? A lot of these skills that women think are unattainable are some of our coaches’ favourite skills to teach! We have a new course this year that is focusing specifically on these skills—the Manoeuvres Course and Lynsey is going to be coaching it. 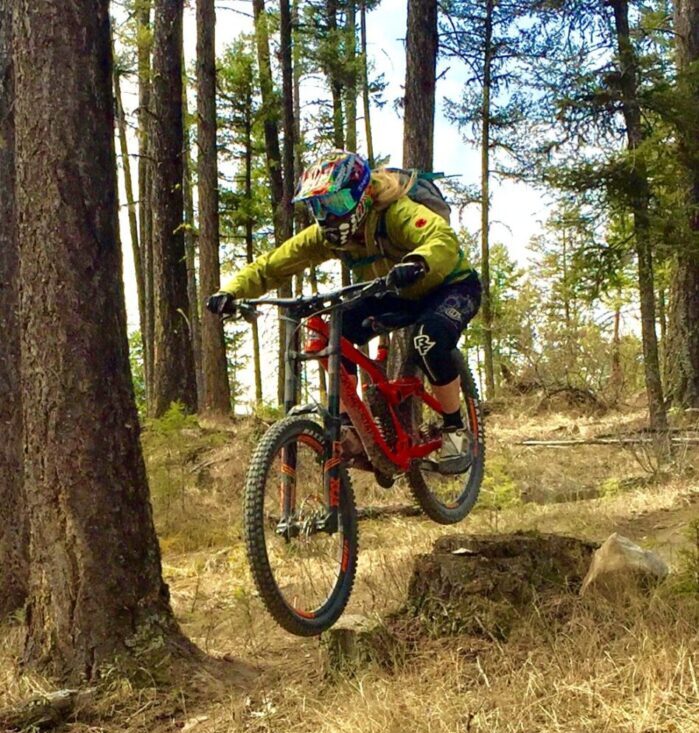 Lynsey’s experience as an Osteopathy Manual Practitioner Candidate has taught her a valuable lesson that has come in handy with her coaching: we cannot be afraid to eat and drink at the same time so, if you are afraid, take a sip of water to calm those nerves. Who doesn’t love a helpful hint when you’re afraid? Her background in occupational therapy has also helped her coach individuals who are coming back from injuries and trying to get back on their bikes.

While Lynsey is happy to coach, what’s the best thing someone ever taught Lynsey?

“If you trust that your bike can get over anything, you will be surprised what it can do.”

When she was first learning biking back in Edmonton, Lynsey really wishes that someone had told her to take a bike course. Initially, she had believed that simply riding alone would improve her skill; something she is quick to admit was very, verywrong of her. She wishes she had taken a course a lot sooner to have built the necessary skills and confidence to have had more fun riding earlier on in her career.